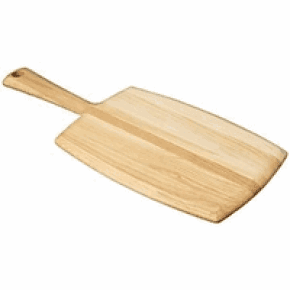 Some weeks ago I had this tremendous increase in hits on my blog. At one point it reached a thousand a day. I realised that it was due to my blog being mentioned in the blog of one of the big guns in the spanking blogosphere. I should be really grateful and it was really nice to have a lot of hits (although it has gone back to normal now) but thing is that I know this person to be kind of mean. One of my friends once had an opinion that didn't suit this person and he told her in quite a rude way. So, therefore, no mentioning of the linking blog here...smiles.

Back to my life. This Saturday Felicia came home after some shopping in town, beaming and being very happy. 'Look what I bought for you!' she said and held out a wooden cheese or chopping board. If I wasn't who I was and Felicia wasn't who she is the fact that it had a handle wouldn't have meant anything special. Now I am who I am and I saw that this was a spanking tool.

It was rather heavy, much heavier than the fish slice and any spoon we own. Felicia wanted to try it at once and I couldn't deny her although it was a bit scary. Soon I was leaning over, knickers down waiting for the impact. She promised me three, just for a start.

Did it hurt? That tool is really something. Three was quite enough I can tell you. Felicia was happy though. She liked it a lot...mean woman!

But this was just the beginning of the story. As you may know, Six Nations is coming up this weekend (for those who don't know this, it is a rugby union tournament). Felicia is very keen on the idea of us having a bet. Her idea is like this: for every round of matches the dice decides one game and she gets to choose a team. I get the other team (I never signed up for fair, really).

When the match is over the one who got the winning team gets to spank the other. The rate is one smack with the new tool per point.

Sounds like an exciting thing, doesn't it? Thing is that we got the game between England and Italy. Guess which team she chose?

So if Italy would win (hah!) I get to smack Felicia's lovely bottom and if England wins my bottom is up for some punishment. Easy and simple.

It would have been more exciting had we got one of the other matches, Wales v Scotland, ok, Wales is likely to win but no landslide. And Ireland should be able to give France a run for the money. My hope is that the Roman spirit will have awakened in the Italian players.

Keep your fingers crossed and I will tell you what happened.

I will definitely keep my fingers crossed....but for what result? Heheheh.

Alyx, who never realized rugby was so exciting.

Roman spirit...rugby? You may as well bend over now Miranda, the Brits will win.

And, I really think there shouldn't be any rugby tournaments without Australia and New Zealand but I might be biased...on both counts.

May I politely request to spank both you and Felicia should England not win this overall.

hello, i like your blog. If you want, we could exchange links betwen our blogs.

Dear Alyx, I can assure you, football had been better.

Dear Mina, you were right of course, it was futile to hope for the Italians to win...weaklings! Request granted...and I am thankful the southern countries are not allowed in the Six Nations.