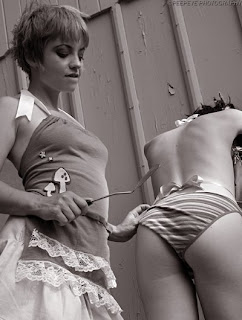 Felicia has her own ideas about what is fun. Yesterday was one of those days when we met up after work and went for some shopping. You know how I hate shopping but sometimes a girl has to do what a girl has to do...or whatever. I found this lovely striped top in a shop with lots of people in it. The top turned out to cling a little too tightly in my opinion but Felicia liked it – on me.

Never mind, we were standing in queue for that top and just when it was my turn Felicia whispered in my ear. She said something like:

'Let's go home, I am going to spank you so you can't sit down for a week.'

A girl may be forgiven for losing her focus in a situation like that. I was very confused when I paid for my top and I think I blushed as we walked home. I so wonder what the girl behind the counter was thinking.

Felicia doesn't say such things unless she means it so directly after dinner she started. Miranda found herself, once again in the knee of her friend, skirt up and knickers down and being smacked on her bottom with the hairbrush.

Felicia kept on for a while. It is strange what happens to your mind when you lie there. It does hurt and I keep thinking: 'I don't like this,' but there is some other part of my mind that kicks in and sort of keeps me there. This is the thing we do and Felicia is now spanking her Miranda and Miranda is not going to make a fuss. That sort of thing. But I can tell you, it is hard to lie there and get smacked for such a long time.

And she wasn't done when she stopped smacking poor Miranda's bottom. No, she had her take off the rest of her clothes and kneel on a chair. I think Felicia has watched too many pictures on the Web. I can understand the need to take off the skirt when kneeling like that, it falls down and gets in the way but the top, that is just...I don't know.

So there was a very naked me getting smacked with the leather belt and that on a very sore bottom. One thing I have thought of is that if you have a big bottom you have more bottom to smack and that would be better for you. If you are, like me, equipped with a rather small one there is not so much bottom to spread out the smacks over. The attention becomes more concentrated one might say. This is kind of unfair.

She was right in one thing, at least. I didn't want to sit on my bottom after she was done with me. We'll see how long this soreness will last but I can tell you that I can still feel it today.

'Any particular reason?' I asked her afterwards.

She just smiled and replied:

It will be interesting to see if Felicia has achieved her goal of making your seat unsittable, for the full 7 days!

Beautiful and as Jim said, do let us know if it lasted the whole week.

Dear Jim, she just said that to scare me...smiles. She is way too kind to really be that cruel.

Dear Mina, Sunday afternoon it could still be seen it had been smacked but I was fine. Sorry to disappoint you all.