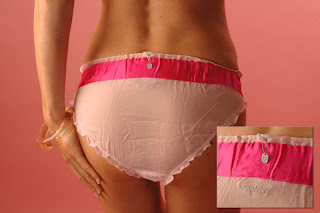 Someone asked me if I prefer to lower my knickers myself or have them lowered by the one spanking me. A great question and one that you most likely only find on blogs concerned with spanking. Anyway, it made me think. It is an important question and not easy to answer. Here it goes, though. I will give it a try.

When Felicia and I started with spankings, a long, long time ago. We were, really just playing with it, giggling like mad, thinking that we were really naughty. It was most often Felicia who did the smacking and poor Miranda's bottom receiving it. We were really shy then and of course she smacked me only on my skirt. It was naughty enough for us.

You know how it is, practice makes perfect or at least bolder. When she tried a hairbrush out she once flipped my skirt up and spanked me on my knickers. I was outraged and humiliated. Mostly because she was looking at my knickers, not so much because it hurt more. Naughtiness feeds naughtiness and soon that was part of it, the flipping up of Miranda's skirt. The reasoning was that spankings are supposed to be bad and if Miranda is embarrassed then it can be seen as a good thing. My friend can be very persuasive at times.

The day came when she thought it was not enough just to smack my knickerclad bottom. I can tell you she surprised me. I remember it clearly. It is not much to say, really, she just grabbed my knickers and tugged them down. Miranda was very, very irate and ashamed and protested and it took some reasoning to make her accept the logic of it. Spanking on the bare is humiliating and that is bad and being bad is what spankings are all about. Anyway, that was my first knickers down spanking.

Then came this idea that I was to prepare myself for the spanking, that being a part of it. This adds some sensations to it. I have to help in the making bad for myself. So quite often I had to lower my knickers myself. This is the way it most often is done in our household now. And I am not as concerned any more. It is not as overwhelming nowadays.

Still Felicia likes to pull them down from time to time. She likes the sensation of undressing me and baring me for the spanking. I like that too. There is something with that, to let her be completely in charge of it all.

This was not an answer, really. I prefer them both although I am most used to do it myself. Both varieties have something that speaks for them. Being stripped by the spanker is, kind of, exciting and...sexy but preparing yourself, being humble and obedient and doing it yourself is also quite...exciting. Enough of this now. If you look at the knickers in the image above you may, just may, see that they actually say 'spank'.

Curtseygirl says: I don't get spanked on the bare that much. When it does happen though, either for fun or for discipline, I always like to pull down my knickers (and often tights) myself; as you say Miranda it is nice to "prepare" for the spanking and makes the immanent contact seem more deliberate. "I know a spanking is coming, but not just yet," or in the words of the great Ms Ciccone-Penn-Ritchie: "my bottom hurts just thinking about it". Oooh yeah! Thank you for a lovely blog.

Another question: What about removing them (or having them removed) slowly, versus having them ripped off of you? (Cost aside, of course). Just wondering...

Curtseygirl, thank you for your comment. Miranda blushes with pride. Preparing is part of the whole thing, isn't it?