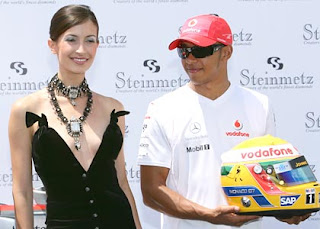 No, no, no, not again. Lewis Hamilton didn't win. And my poor, poor bottom had to suffer for it. Felicia was very satisfied as we followed the race yesterday. As Alonso crossed the finishing line ahead of Lewis Hamilton she turned to me with an evil grin and said: 'You're in for a thrashing.'

If you don't know it, my girlfriend Felicia and I have an ongoing bet that says that if Lewis Hamilton wins a F1 race I get to spank her, otherwise she gets to spank poor me.

I pleaded with her, argued but to no avail. Well, a little actually. She admitted that Hamilton's overtaking of Raikkonen was brilliant and she told me she would only use her hand and not the dreaded hairbrush.

Felicia's hand can sting, I can tell you that. And especially if she thinks that such a mild implement (can the hand be called an implement, really?) calls for a lengthy spanking.

Felicia wouldn't be who she is if she didn't thoroughly enjoy spanking poor Miranda. She enjoyed it, no doubt about that. Poor Miranda was very meek and very sore when she was done.

My hope now is that Lewis Hamilton will win the whole thing. That would call for some severe thrashing of Felicia's bottom, don't you think?

Anyway, I decided to illustrate this post with a picture of me and Lewis Hamilton. Don't you think I look glamorous?

A lovely post, Miranda. With a lovely picture to illustrate. Do I think you look glamorous? No, I think you look like a woman telling porky pies, and Felicia should address that right away! *vbg*

Just as I envisioned you --